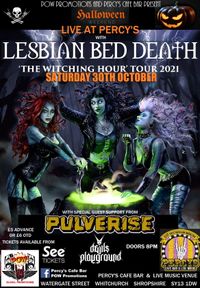 HALLOWEEN WEEKEND With Lesbian Bed Death is a UK based band best described as Gothic Punk meets Hard Rock with a theme of Horror running throughout.

With Special Guest Supports from...

Brutal Rap Metal Groove band from Yorkshire. Pulverise are a high energy, partycore, rap metal, groove band who are tearing the scene a new one! They're based in West Yorkshire, UK and love spreading their infectious energy, party core vibes, positivity, passion, head banging riffs and booty shakin’ grooves. They bring the party, pits, dance-offs and most of all NOISE! Their influences are (hed)pe, Sumo Cyco, Biohazard, Skindred, Stuck Mojo, Madball, Rage Against The Machine, Beastie Boys, White Zombie and Limp Bizkit.

Devil’s Playground exploded onto the UK music scene in late 2015 with a fresh new sound and look. With their wealth of experience, coming from members of previously performing at the likes of Download, Bloodstock, Metal Camp and Bulldog Bash, they set their sights on delivering a punishing and energised live performance! The band released their first tracks online in November 2015 and followed this us with a heavy gigging schedule to build up momentum, fan base and spread the word of the Devil’s Playground! Through 2017, Devil’s Playground powered on, earning a solid fan base and played a sold out Bloodstock Open Air in August to, yet again, another huge crowd. The band followed this up with a series of dates with London metallers GraVil, plus various dates around the UK for the rest of 2017/18. The band took some time out to write and record a new album that sums up what Devil's Playground is all about and how they have grown, whilst staying true to the eclectic sound that makes the so individual. Devil’s Playground are highly addictive and fun to watch, so don't miss them out on the road…….Are you ready to Play?

Times are approximated and may be subject to change

£5 Advance Tickets available from See Tickets Or £6 on the door on the night of the event.